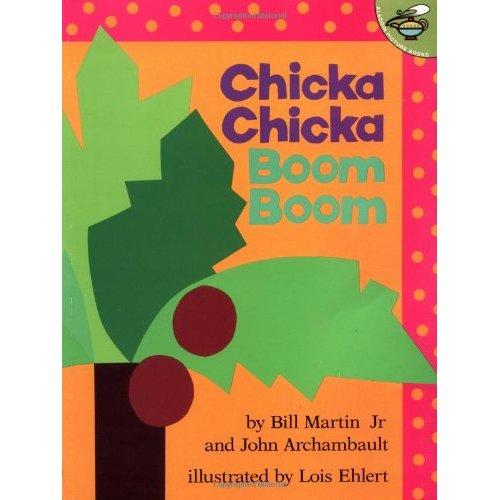 “A told B, and B told C, ‘I’ll meet you on top of the coconuttree.’” This rollicking rhythmic beginning starts a lively, tongue-tingling adventure as all the characters from A to Z try to climb to the top of the coconut tree. But will there be enough room? With an insistent, repetitive chorus of “chicka, chicka, boom, boom,” this book entertains while teaching the alphabet without even trying. Capital and small letters are both introduced. When all the letters get to the top of the tree, it bends over and all the “baby” (lower case) letters fall out. Then, each “adult” (upper case) letter comes, rescues its baby, and runs home to take care of their various (not serious) injuries. A very clever presentation of the alphabet.

The 26 characters in this rhythmic, rhyming baby book are a lowercase alphabet with attitude. "A told b, and b told c, 'I'll meet you at the top of the coconut tree'"--which probably seemed like a good idea until the other 23 members of the gang decided to follow suit. Lois Ehlert's chunky block illustrations show the luxuriant green palm standing straight and tall on the first page, but it begins to groan and bend under its alphabetical burden. First the coconuts fall off, then ("Chicka chicka... BOOM! BOOM!") all the letters also end up in a big heap underneath. A very simple board-book version stops there, but this original text goes on to introduce the helping hands of the 26 uppercase "mamas and papas and uncles and aunts." (Baby to preschool) --Richard Farr --This text refers to the Hardcover edition.

In this bright and lively rhyme, the letters of the alphabet race each other to the top of the coconut tree. When X, Y and Z finally scramble up the trunk, however, the weight is too much, and down they all tumble in a colorful chaotic heap: "Chicka Chicka . . . BOOM! BOOM!" All the family members race to help, as one by one the letters recover in amusingly battered fashion. Poor stubbed toe E has a swollen appendage, while F sports a jaunty Band-Aid and P is indeed black-eyed. As the tropic sun goes down and a radiant full moon appears, indomitable A leaps out of bed, double-daring his colleagues to another treetop race. This nonsense verse delights with its deceptively simple narrative and with the repetition of such catchy phrases as "skit skat skoodle doot." Ehlert's bold color scheme, complete with hot pink and orange borders, matches the crazy mood perfectly. Children will revel in seeing the familiar alphabet transported into this madcap adventure. Ages 2-6.