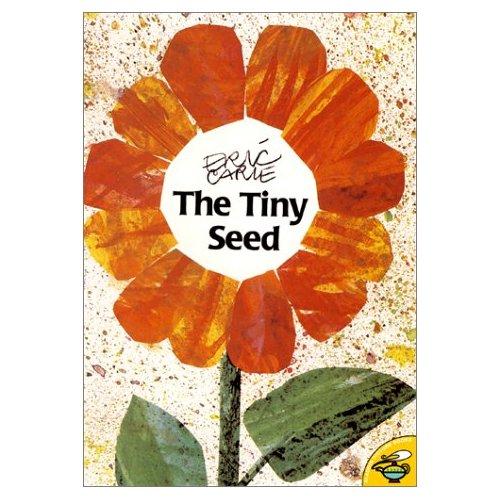 In autumn, a strong wind blows flower seeds high in the air and carries them far across the land. One by one, many of the seeds are lost -- burned by the sun, fallen into the ocean, eaten by a bird. But some survive the long winter and, come spring, sprout into plants, facing new dangers -- trampled by playing children, picked as a gift for a friend. Soon only the tiniest seed remains, growing into a giant flower and, when autumn returns, sending its own seeds into the wind to start the process over again.

作者简介：Eric Carle's eloquent text and brilliant collages turn the simple life cycle of a plant into an exciting story, a nature lesson, and an inspiring message of the importance of perseverance.

This picture book admirably conveys the miracle of a seed. Flower pods burst and dispatch their seeds on the wind; the air-borne seeds are subject to myriad disasters; and the ones that make it through the perils of the seasons to become mature flowering plants are still susceptible to being picked, trod upon and otherwise damaged. But nature allows for survivors, and so the tiny seed grows into a giant flower, releasing its seeds and continuing the cycle. As he has demonstrated with The Very Hungry Caterpillar and other books, Carle has an extraordinary kinship with nature. Here we have not just the explanation of the life of a flower, but drama, lessons of life and a lovely spirituality. This is a reissue of the original 1970 edition, with expanded, expansive collage illustrations. The pages, like the seed pods, burst with color. Ages 4-8.